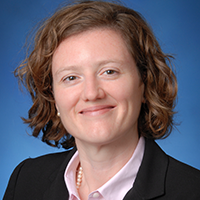 At NAMIC, Erin has testified before numerous state legislatures and Congress on behalf of the association’s 1,400 member companies and their 170 million policyholders on topics ranging from frequency and severity of auto accidents, reform of opioid abuse in the workers’ compensation sector, and pre-disaster mitigation aimed to harden local communities throughout the United States.

In addition to her professional work, Erin is passionate about the St. Baldrick’s Foundation, an organization aiming to cure childhood cancers through dedicated cancer research. Erin shaved her head in September 2019 for the cause, becoming the world’s fifth leading fundraiser for that year.

Erin received her bachelor’s degree in political science from Mary Baldwin University and her master’s degree in public administration from Virginia Commonwealth University.

Prior to joining the NAMIC team, Erin spent more than six years as the director of government affairs for the Virginia Society of Certified Public Accountants, where she led all lobbying initiatives, grassroots activity, and the Society’s Political Action Committee. Erin resides in Richmond, Va. with her wife Erin and their son Anderson.