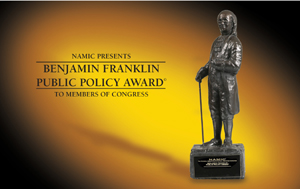 In 1752, Dr. Benjamin Franklin, with other leading citizens of Philadelphia, founded America's first successful mutual insurance company, The Philadelphia Contributionship for the Insurance of Houses from Loss by Fire. In addition to founding an industry that would become a cornerstone of the nation’s economy, he was also a dedicated public servant. It is for these reasons that NAMIC created the Benjamin Franklin Public Policy Award© in his honor. This public policy award was established in 2003, and was first presented to the 107th Congress to coincide with the 250th anniversary of the Contributionship.

The award is presented to federal legislators who demonstrate their unwavering support and leadership on behalf of NAMIC members, insurance consumers, and the property/casualty insurance industry. Only members who truly understand and support our industry, successfully protect the free and open market environment, and work to facilitate the positive relationships between insurers and their insureds are considered for this prestigious award.

Every two years, the NAMIC members who travel to Washington, D.C. for the Congressional Contact Program – one of the foundations of NAMIC's effective, grassroots advocacy – distribute the awards on Capitol Hill to all lawmakers that have earned them for their actions in the previous Congress. People have learned that the presence of our statue of Benjamin Franklin in a member’s office signals that he/she is a friend of the industry.