Following the financial crisis there has been an increased regulatory emphasis on the overall financial picture of an insurance group, instead of the past focus on individual insurance legal entities within groups. The financial crisis provided a concerning example of how most of the affiliates within an insurance group could be operating soundly with appropriate levels of capital but one small entity, outside of insurance regulatory review, could put the entire group at risk. This has fueled supervisory attention to comprehensive oversight of insurance groups to avoid repetition of this serious consequence. One of the solvency parameters used by regulators is the amount of capital insurance groups hold to support all their legal entities.

Internationally, the International Association of Insurance Supervisors (IAIS) shows great interest in global consistency around group capital and has developed and field tested a standard formula. These international standards have the potential to impact the U.S. companies operating only in the U.S. in very significant ways. IAIS is creating a group capital standard that will be required of all countries in the world for certain internationally active insurance groups. This organization calls for a group capital requirement that is measured on a consolidated basis using a market-adjusted or fair value valuation method. This IAIS valuation approach differs from IFRS, U.S. GAAP and NAIC statutory accounting principles, creating problems for U.S. insurance groups in general and mutual insurers, in particular. To date the IAIS remains flexible on the valuation approach, but they are insistent that the final version of the international group capital standard will require a single valuation method.

Federal and the NAIC

The National Association of Insurance Commissioners and the U.S. Federal Reserve (Fed) are both developing group capital approaches for U.S. insurers that differ from the IAIS approach. They are both allowing insurance groups to use statutory accounting, they are both discussing an aggregated approach to preserve the existing legal entity RBC and they are both relying on RBC as the basis for their formulas. For the time being insurers can be comforted by the U.S. solidarity on these issues, but they continue to focus on improving the IAIS group capital standard, known as the ICS (insurance capital standard) to avoid any surprises in the future. 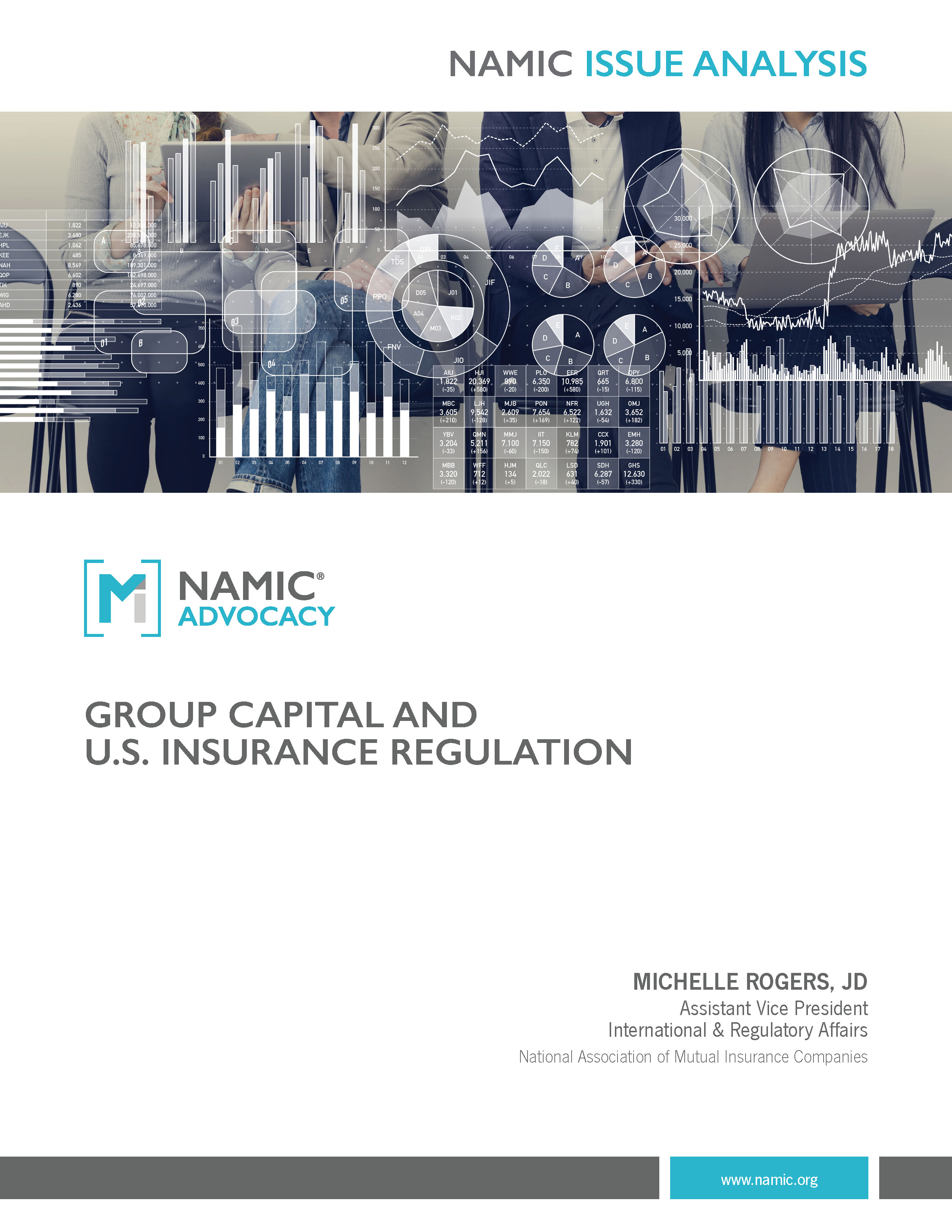 Group Capital and U.S. Insurance Regulation
A better understanding of why the U.S. insurance regulators and industry cannot agree to an EU-type capital requirement may provide some context for meaningful discussions at the G20, the FSB, Congress, and among other policymakers before such a standard is adopted. In this paper, NAMIC provides background about the U.S. insurance supervisory system and group capital efforts at the IAIS, National Association of Insurance Commissioners, and Federal Reserve to outline the real need for a directional change at the IAIS. (Published 12/21/18)

At the IAIS, NAMIC asserts that only the state regulators in the U.S. should determine capital requirements for U.S. insurance groups. We argue that the international standard should defer to the local jurisdictional capital approach for all countries. We also believe that capital is only one tool for regulators in regulating solvency. Increased levels of capital would have done nothing to prevent the insurance impacts of the financial crisis. No amount of capital could have eliminated the AIG situation.

There are many nuances and unique considerations in capital proposals from each jurisdiction, but the basic issues of concern at the IAIS are as follows: